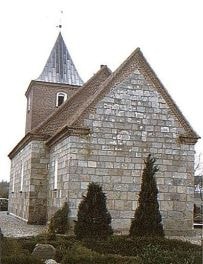 The church is located in the eastern part of Svostrup parish on the road that linked the two important towns in ancient times – Skanderborg and Viborg.

Even before the church was built, in around 1170, there was probably an altar by the roadside, where travellers could stop and say their prayers. In 1788, the then owner of Allinggård, Jean A. Fisher, carried out a major refurbishment and renovation of the church with the construction of a tower with a pyramidal roof, topped by a weather vane, in which “F., 1788” is carved. The Fisher family from Allinggård is not buried at Svostrup. However, the Vendelbo family, which owned Grauballegård for several generations, is buried under the floor of Svostrup church. The burial must have contained 12 coffins, some of which still remain in a brick vault under the chancel. Henrik Vendelbo and his wife donated the chalice and disc to the church with the engraving: “For their funeral, this chalice and disc are donated to Svostup church anno 1693”.