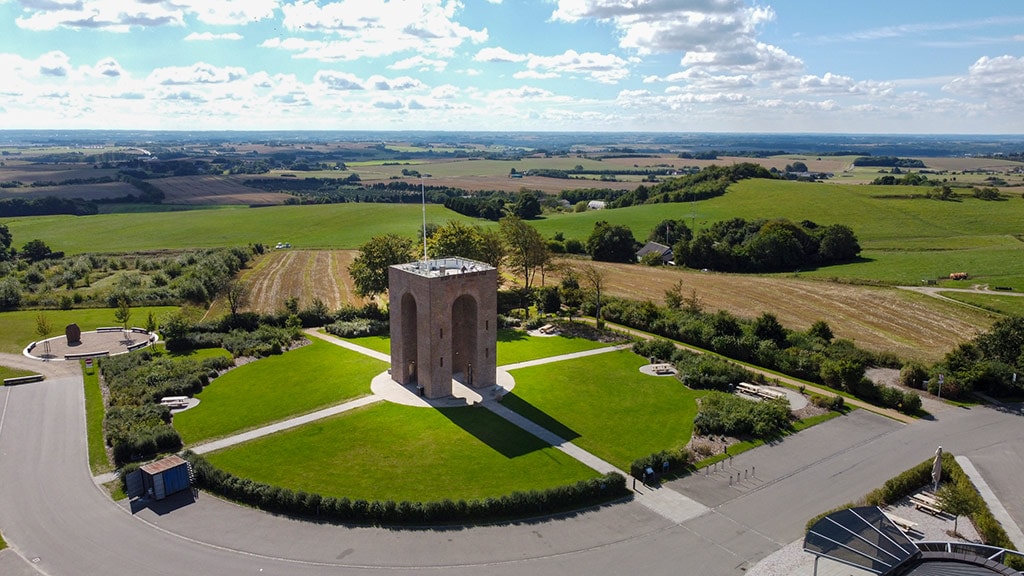 Ejer Baunehøj is the highest natural point in Denmark, 170.89 metres above sea level. A characteristic tower 13 metres high is placed on the top. The tower was built in 1924, as a memorial of the reunion of the south of Jutland which was lost to Prussia in 1864, and reunited with Denmark after the First World War.

From the top of Ejer Bavnehøj is a magnificent view over a unique moraine landscape developed in the latter part of third ice age. Here the ice borderline of the east of Jutland is very clear. The ice flowed around the high plateau of Ejer. In bright weather it's possible to see the island of Samsø, and even the bridge over Lillebælt 50 kilometres away.

The highest point in Denmark

Until 1847 people thought that Himmelbjerget ("Sky Mountain") was the highest point in Denmark, but it's only 147 metres above sea. At that time Ejer Baunehøj was declared to be higher, and in 1874 it was measured to be 170.95 metres above sea level. Nevertheless Yding Skovhøj, only 3 kilometres away, was declared to be even higher, due to several new measurements in the middle of the 1900's. This was a great disappointment for people involved in Ejer Baunehøj.

Nevertheless, the battle of heights took a dramatic turn in February 2005. A panel of experts selected as referees in the battle proclaimed their winner. The panel, made up of a geography professor, an archaeologist, and an office head at Denmark’s National Geographical Survey, determined that Denmark’s highest point, measuring in at a height of 170.86 metres is Møllehøj (Mill Top). The winner came in exactly nine centimetres higher than the second highest point, Rodebuske in Yding Skov, and 51 centimetres higher than the third highest, Ejer Bavnehøj. But Møllehøj is located only 200 metres west of Ejer Bavnehøj on an ordinary field belonging to a farmer. There is only a minor slope between the two tops. According to the international principle of primary factors they are defined as one complete top.